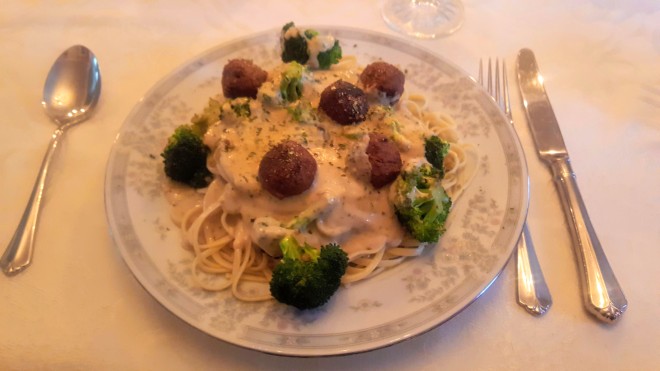 Posted on July 17, 2019 by simplesweetspot Posted in Musings

…and the tale of making it.

Mr. Sweetspot and I are both vegan. As a result, we both cook a lot, but whereas I consider myself an amateur, Mr. Sweetspot is a true chef. Throughout his vegan cooking career he’s made all kinds of things, from vegan roasts, through traditional West Virginia pepperoni rolls to mac and cheese three ways. Most of his recipes to some degree follow Sky Michael Conroy’s “gentle chef’s” Molecular Gastronomy techniques, but he has quite a few of his own creations. Amongst these is his alfredo sauce. As we’ve recently committed to writing it down for our yoga instructor (I know, pretentious much?), I decided that sharing is caring. We threw a dinner party for some friends, Mr. SS cooked his sauce and I wrote down the recipe… fueled by a friend’s strawberry infused gin. 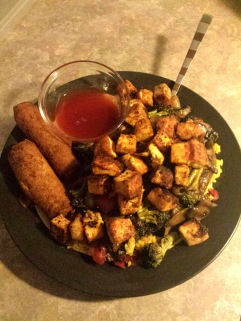 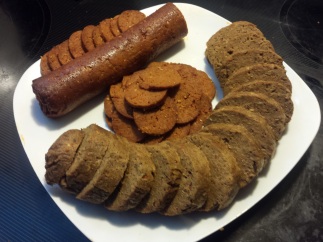 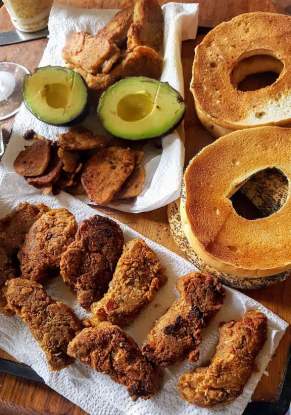 YES They are vegan!

We went over to a friend’s house and there were six of us total. This recipe fed all of us and there was a bit leftover (probably ½-1 serving). We brought the food ingredients, but not utensils or cooking supplies. At home, Mr. Ss typically prepares this in a blender. As E had a food processor, we decided to go with that, especially as one of the ingredients is cashews.

-2 cups of unsweetened soy milk (West Soy is best, but any UNSWEETENED soy milk will work, just check the ingredients as most “plain” or “original” still contain sweetener. Silk also makes a decent unsweetened,  you can check Asian markets for fresh made or make your own if you’re into that sort of thing)

Optional: In a food processor. Begin blending. Allow a few seconds to pass, for one of your friends to start screaming “Something is wrong”. Realize a big amount of the mixture is rolling on the floor. Pause blending. Begin clean up. Allow everyone to scatter looking for a pot or pan to transfer the mess into a bowl or pot. Get the situation under control. Allow E to explain how the device is assembled.

No biggie. Do your best to eyeball what is left and add ingredients appropriately to bring up the volume to what it was. Don’t forget, the cashews must be suspended in liquid to avoid forming a paste. You got this. Dump everything into the food processor again!

Turn the food processor back on. Confidently look at the group, as things seem to go well. Get in the groove. Until a friend exclaims: “It’s happening again”. If there’s more than two of you there, I strongly recommend making a game of this. Allow the cook and at least one other person to repeat the chaotic ritual. Drink as hilarity ensues.

Move onto using a blender. Around this same time you could put your pasta on the stove, but when I suggested writing that down, Mr. SS looked at me with horror and said: “You can’t give them everything”. So, make pasta according to your own discretion. Whatever. Not going to spoon-feed it to you, that’s not how recipes work.

Back to the alfredo sauce. You’ve made some paste/ mush/ solution. Good on you. Now strain it over a nutbag into a bowl. Pro tip in the paint section if your favorite home improvement store the have paint straining bags that come in a three pack. They are the same thing as entry level nut bags at a third the price. It will remove any chunky bits, for fancy company. Mr. SS proceeded to explain that he skips this step at home. I inquired if I’m not fancy enough. Hilarity ensued again. Boy, is cooking fun!

Throw that mess into a pan. To this you will add:

-1 tsp vegan instant broth (flexible, add to taste, could be more, whatever)

-1 tsp salt or more to taste

Simmer in a pan while whisking continuously until the consistency of alfredo sauce. I don’t have the exact time, but it’s roughly three bouts of conversation in a group of 5 people. Once you’ve hit topic #4 you could remind the chef to stop stirring… but they’re in the kitchen staring at the sauce, so that feels a bit like micromanaging.

Just before plating add ¼ cup of dried (or fresh if you fancy) parsley to the sauce mixing well Plate over pasta and steamed or grilled broccoli, with grilled vegan meatballs (we buy the Aldi brand) using olive oil and re-hydrated or fresh minced onions and a few healthy dashes of soy sauce or Tamari to encourage browning. Enjoy with good company and pair with water or wine of your choice. Serve with nutritional yeast, and more parsley for garnish and salt and fresh cracked pepper on the table. Talk for at least a full hour while everyone compliments you on your meal.

The sauce is buttery and creamy and so so good!

If you happen to make this, tell us how you like it! It really is a show stopper for your non vegan and vegan friends alike.

Hope you try it out!