Posted on October 10, 2018 by simplesweetspot Posted in Financial, Food!, Musings

As generally frugal peeps, we know the basics. We pack lunches, ride our bikes, cook at home, in-source anything we can, stick to a budget and cut each others hair. We have side hustles, including selling a whole bunch of our possessions on eBay. We even go on frugal dates. We’ve also downsized dramatically– we currently live in 200 square feet in an RV that we’ve converted into a micro-home. We love the minimalism and simplicity that come with this small space. Dusting tchotchkes is a thing of the past (potentially part of the problem is that it never was a thing of the present)! We’ve learned to treasure our butter-knife. That’s right- singular butter-knife, we take turns to butter our bread.  We do own multiples of other cutlery (although true confession… we’ve misplaced our other fork. We’re getting by with one regular, one plastic, hoping we’ll find it.). Our tiny lifestyle isn’t for everybody, but here it is important for context. To recap- 200 square feet.

In addition to/in spite of being frugal peeps, we are also friendly peeps, and as such, like to socialize. We love hanging out, talking, playing games, dancing, drinking, eating and all other comradery. So do most people- after all, we’re social animals. The problem comes with trying to do all of the above without spending mad money. The top frugal advice will tell you- invite people to your home to hang out, talk, play games, etc. But- 200 square feet. We knew we had a problem on our minimalist hands.

Now, before you imagine us as completely removed hermits, we just hosted a party this Saturday with a bonfire and movies. Especially in nice weather, we now have the situation under control. But when we first moved here, we were largely flying by the seat of our pants. Realizing that we were going to be gone, in various intervals, for 2 of the 3 summer months in 2017, we decided to move, titillated by the rent savings. That part panned out, but we were living off grid for 6 months, with a small solar array and a generator for power, hauling water from the marina… not the dream host situation.

… Ok, these also have vegan “beef” and a side of home fries. Not how we eat them on the road 🙂 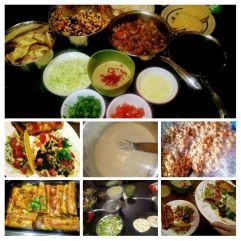 This is why I need to work out in the first place!

With that in mind, we knew we could meet people at bars or out for dinner… but I quite seriously intend to be a millionaire by the time I’m 40 (this statement feels so kick-ass to write!), so that option was out. We knew we weren’t up to hosting yet. So we had a very bold idea- what if we invite ourselves over to other people’s’ houses? Obviously, we knew they had to get something out of the deal- we decided that we would cook them dinner. Mr. Sweetspot is quite the chef, so this idea had merit… but we thought it would take a lot of convincing. After all, hosting is quite the ordeal and mama always warned me against “inviting yourself over”. 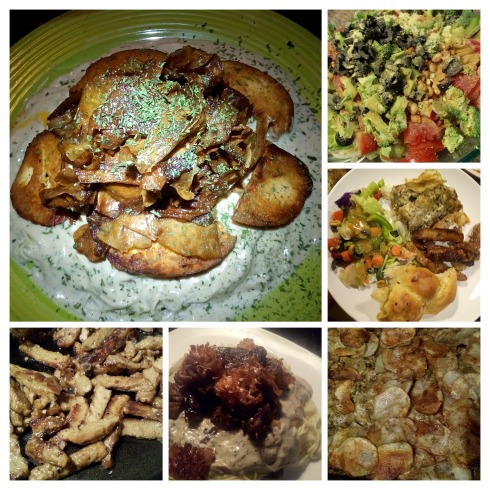 We began the conversation with our first set of friends with a lot of trepidation. We laid out the plan and they said: “OK”. They’re confused, we thought, they misunderstood the proposal. We tried again, with smaller words: “You-house. We-food”. They were still stuck on: “OK”. This time, there was no chance of a misunderstanding- they actually wanted this to happen. Weirdos. We went to their house, cooked and ate a feast and had an amazing time. On a frugal note- we can easily make dinner for 4-6 people for less than the average bottle of wine. The feasts we talk about rarely clock in at more than $10-12 total. Seems like we were achieving frugality and fun! 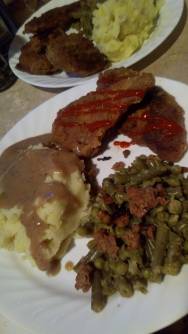 Emboldened by our success, we decided to approach other friends. After all, it worked once- we could conceivably get away with this again, right? “Hey, we wanna come over…to your house…on our schedule…and we’ll cook you dinner.” “OK.” Somehow, we messed up the explanation again, they were so quick to agree. We had to slow down this crazy banter! After clarification, it turned out that they too understood the concept. Curiouser and curiouser. We feasted in jubilation once again. And then again.

A short while later, another friend approached us to say: “I heard you come over to people’s houses and cook dinner. Come over and cook for me and J.” Since she solicited us directly, we decided to skip the “once again, but slowly” moron test. It seems that this was actually what she wanted. We were more than happy to oblige. Why of course, this is what we do. Mr. SS prepared Indian (his specialty) and we ate and drank ourselves silly. We also played board games and engaged in general merriment. It felt like our plan was working and suddenly our reputation was preceding us. Dinners happened at least every other week. Last Wednesday, our friend even hosted us at a party of this nature at her place, to which we invited friends she didn’t know… kind of the perfect win in this story. Feasting and community building one home at a time.

That would be it for our tale, except for one small caveat. We’re vegan. Naturally, this means we cook and eat vegan. In terms of our friend circle? One vegan, one ex-vegetarian. So not only are we convincing people to let us cook for them in their home, we are convincing them to try a new and foreign diet. Somehow, they are saying yes to this. We didn’t think of it as a big deal, until the one vegan friend last Wednesday, introduced to this friend group for the first time, inquired if the whole group was vegan. Only the three of us were. The other six were there for Mr. SS’s food and fun. That’s how we realized, this crazy thing we’re doing is even more crazy than we initially thought.

We try not to be preachy vegans- that means we don’t talk about it unless asked. Nobody likes being told what to eat or not to eat unsolicited (Don’t trust me? Try it out on the next stranger). When we go to somebody’s house, we clarify food allergies and food preferences (does everybody like onions?). From there, Mr. SS creates something delicious, everybody enjoys it, and the vegan-ness of the dish is not really discussed. Lately, talking to our vegan friends, we’ve realized that exposing meat eaters to vegan food is in itself super cool. Also, from an environmental perspective, if we do this once a week, that is 52 meatless meals per year. We very rarely cook for just one other person, often cook for multiples, so 150 per year would not be an exaggeration. Adding this up feels really good.

Turns out, microhome or vegan, it is possible to frugally hang out with friends. I’m as surprised as anybody, but we’ve now sustained this for over a year. It’s become the thing we’re known for and people now ask us to come over to them vs. the other way around (recently we had three friends vying for three separate dinners across just 10 days) This mode of hanging out is just one of the things to which frugality and micro-homing have opened my eyes. 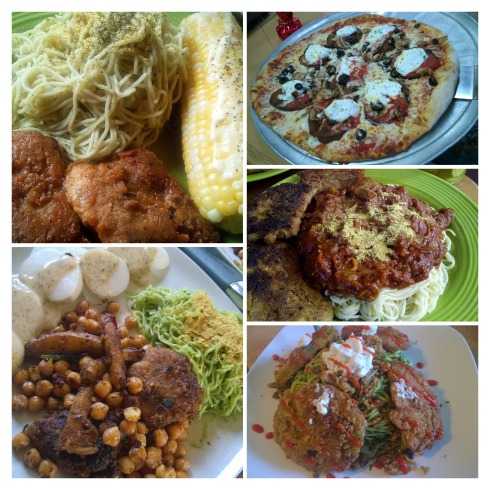 How about you- how do you frugally handle friends and entertaining? Any crazy ideas? Want us to come cook you dinner? Careful, we might take you up on it!