Spoiler alert- we didn’t. I mean, the title kind of gives this away. So why is this worthy of a story? Despite the lack of success in the final acquisition, we discovered some things along the way worth sharing. Next time a free “gazebo” comes along (gazebo here represents any large coveted item) we will be ready for it!

Fellow frugalists can all agree- there’s nothing as cool as free road trash treasure. From furniture, through flame throwers, you can find almost anything by the side of the road. If you are a rural frugalist (say that 10 times fast) you can vouch for road finds from tractor parts to downed tree trunks. Last Friday, as Mr. Sweetspot was coming home from a job interview in a small town about 20 miles away, he noticed a gazebo with a “free” sign on it. As we’ve been wanting something similar, he stopped and inquired about it. Turns out, the guy was building an extension onto his back deck and didn’t need the gazebo anymore. The assembled steel frame, as well as the corresponding canvas covering were up for grabs. The guy assured him that with the removal of only two of the approximately 1,500 pieces, the whole structure would fit on a truck bed. If we had a truck, the story would end there…

In spite of doing a lot of diy construction projects on our land, we don’t own a truck. We mostly transported stuff in the backseat/ on the roof/ strapped to the bike rack of our 1986 Volvo. This tends to work well for us, but has obvious size limits. There was not a scenario where this could work for a gazebo. However, like most frugal choices, owning the Volvo has some financial benefits. Since the car itself was $1000, we don’t have car payments and insurance is only $69.34 a month, this means that we can afford the occasional car or truck rental. This was how we were going to proceed.

After texting me to check that I would in fact be interested in acquiring this gazebo, Mr. Sweetspot started calling around to price out some trucks. With mileage, Uhaul would have come in at around $60. This was a little more than we wanted to pay, and there was a concern regarding the fit. Strapped in a truck bed, the gazebo structure could spill out a little, and with some safe ratcheting, it would be fine. With the 4 wall structure of the Uhaul’s box, we might be running into a fit issue. He looked at Lowes trucks next, but there weren’t any available (our local Lowes, and the one in the town we lived in prior, both technically have trucks for rent. We have attempted to rent one quite a few times, and have never been successful. Has anyone actually done it?).

Mr. Sweetspot is very creative, so his next stop was our local hardware store, where he inquired about truck rentals. They did not offer a rental, but offered local deliveries of their goods for $5.40 considering we only live about 8/10th of a mile from the hardware store, after a little explaining they offered to drive out to the neighboring town, help load the gazebo and deliver it to our land for $20. This was not haggling on our end- that is the actual price we were quoted. With a distance of 44 miles for the round trip, I imagine this price barely covers fuel let alone mileage, not to mention the actual service, or the labor of their two employees. I’m not sure how they could afford to offer this, but certainly it was too good of a deal to pass up. Mr. SS signed on the dotted line, and we were all set up for a morning pick up the following day.

Before: Found by the roadside 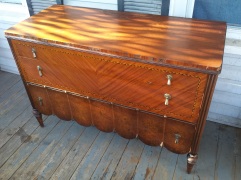 After: Cleaned up nice!

The next day we got up early, and Mr. SS called the gazebo owner to confirm the pick up time… only to learn that the gazebo had already been hauled away by somebody else. As disappointing as that is, I completely understand why it would happen. When you’re trying to get rid of something, for free or otherwise, you are going to give it to the first person who will take it off your hands. People flake out all the time, so I know I would have done the same thing. We called off the truck, and resigned ourselves to a gazebo-less future…

We learned two very useful things along the way. The first, when it comes to the old adage “you snooze, you lose”, it certainly applies to curb finds. In the future when we find something this good (this gazebo was really cool!) we need to get it then and there, or as close to it as possible. Waiting will most likely result in losing the item.

Some windows we’re going to claim next.

The second lesson is that we can get anything delivered in town for $5.40, and potentially up to 20 miles out of town for around $20 by getting a little creative with the guys at the hardware store. Those are crazy good rates. Even though we’ve since started cataloguing our friends with trucks (we have two new ones on the list!), at $5.40 we can’t even buy them a “thank you” six pack. We will definitely use this service in the future.

Lastly, as an added bonus- writing this made us look at the numbers for our car insurance, and they seemed a little high. We’ve been involved in a few accidents over the years, but it’s been sometime. As I was writing this article, Mr. SS did some research and just switched us from Safeco to Progressive. We’re going to save $304 a year- I guess it’s going straight in the gazebo fund!

How about you? Have you picked up some curbside treasure and discovered something cool along the way?

4 thoughts on “How We Almost Got a FREE Gazebo”