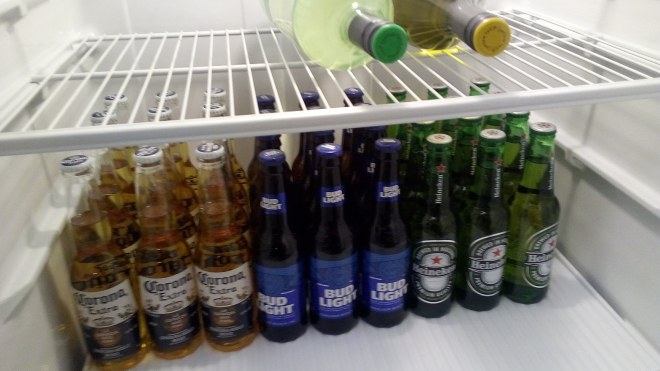 Posted on September 8, 2018 by simplesweetspot Posted in Musings

In August we decided to give up drinking for a month. There were quite a few reasons. I found myself drinking a lot and was looking to cut back. I knew that it would be hard, which meant it was the right time to try quitting. Mr. Sweetspot joined me, because he is always up for a challenge and he wanted to drink alcohol more mindfully. August 1st, we embarked on the journey.

We had several expectations. In no particular order, we thought the beginning of this process would be harder than the end. We were worried about friends opinions and judgments. We expected some weight loss. We expected our alcohol tolerance to change. We were also excited to experiment.

I read a few blogs about this prior to trying it out and the consensus seemed to be that the second half is harder. “Ha!” I thought at the time- “…nobody on the internet likes wine as much as I do”. I hate to admit, they were all right. 31 days is a long time. The first week is really exciting, because you’re experiencing the challenge for the first time. Every day is a little victory and you find yourself thinking “I’m doing it, I’m really doing it.” The following week, you start to feel a little superior and enjoy your discipline of the alcohol fast. Week 3 you are really in the groove. The remaining 10 days? Honestly, they’re just boring. By then, you feel accomplished enough and you just want a beer. You’ve proven you can go without, the initial rush is gone and while you’re not exactly counting down the days, you are quite aware of how many you have left until the first of the next month. If I were to do this in the future, a three week timeline seems much better.

We’re already pretty weird as minimalist, tiny-home-dwelling, artist, vegans, and our friends have no issues accepting that dispite many, thought not all, of them lead a more “conventional” lifestyle. Why were we worried about them accepting our not drinking? It speaks to two issues, our own insecurities and the normalization of drinking alcohol in our culture. Not drinking is a non-conformist action and as such, is sure to ruffle some feathers. Our friends were awesome. Nobody cared. One person teased us one time. Not drinking was in no way a big deal to anyone but us, which is a great reminder if you tend to worry about what people think something non-conformity will break you of that pretty quickly. An interesting observation emerged, however. Drinking is a behavior influenced by the group. Two people not partaking at a gathering will affect the behavior of a smaller group of at least 8 or so people. You also learn in your various friend groups if you are the person leading the behavior or the person following. I also “learned” (and I say it like that because I knew it already) that as an introvert I used alcohol as a social crutch a lot. It was nice to discover that I can be equally cool sober and it felt fairly empowering for me.

I expected something dramatic, but I definitely screwed the pooch with data collection on this one. About 12 days in we began following what we now know is the 5:2 diet, a form of intermittent fasting, where we choose to eat only raw vegetable salads on Tuesday and Thursday. (The actual diet restricts calories to around 500 but does not dictate what food. The salads were our idea to increase our veggie intake, yes, something even vegans need to do more of) All I can say is we each lost over 10 lbs last month, but the scale didn’t start budging until we changed our diet. The two weigh-ins prior showed no difference. None of this is statistically significant enough one way or the other, but we were fairly disappointed to see no results from cutting out alcohol alone.

We thought that after a month off the sauce, our first beer would set us staggering, thus improving our frugality by turning us into “cheap dates”. Not so. One month does not seem to affect tolerance whatsoever, at least for us. This is upsetting, especially for frugal reasons. No matter how you buy it, alcohol is an expensive choice. The thought of one drink being enough was very tempting, but alas false. In tolerance alone, we were no different July 31st than September 1st.

Holy moly, we did not drink mindfully. There were so many times we drank soooo much shitty beer just because it was there. All the times we had wine just because we were socializing. Choking down watered down or poorly made cocktails because our inner 20 year-olds were shouting “party foul!”. Even that first drink of fine bourbon on September 1st, Mr. SS found he could have enjoyed half as much as he poured just as much as the whole glass, and yet, as though we had learned nothing he finished anyway rather than pouring it back in the bottle to enjoy another time. Going forward, we want to make more conscious choices of why we drink, what we drink, and how much. There is no way around the fact that drinking is bad for you. Drinking is also fun and widely accepted and encouraged. We are by no means quitting “for good” and certainly plan on getting drunk in the future (looking at you Friendsgiving) but we want to make sure we are making a mindful choice, not merely following a mindless habit.

Have you ever tried a dry month? How was it for you?