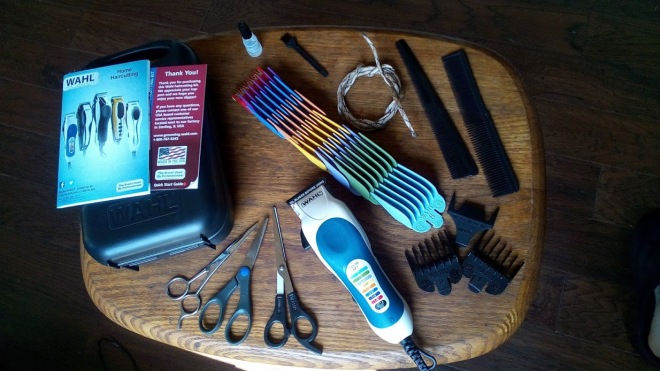 Yes, we are that frugal- we cut each other’s hair. We mostly keep this on the DL, because based on people’s reactions you’d think we are admitting to doing our own medical procedures. “How was my weekend? Pretty great- I took out Mr. SS’s appendix and then went for a walk. You?” We recently shocked our friend at the farmer’s market after revealing our awesome locks. She asked whether I was trained. I admitted to watching multiple YouTube videos, which in this case felt sufficient. Below is our review of the why and the how, so if you wish, you too can wow (and worry) your friends by telling them how you’ve gone off the deep end cut your own hair.

I first considered the notion after reading this excellent post from Mrs. Frugalwoods. She made this sound both easy and fun, and I was fully strapped in on a ride to frugal town. So I did what any reasonable person would do: the math. Mr. SS had a snappy gentleman’s “old fashion” with a straight razor line-up, and sharps hook, three step fade and a hard part (barber shop talk for “snappy yet complicated”). He went to the local young and hip barber shop in town, where while you wait (no appointments), and pay cash (no credit card points) you can have free beer, billiards, xBox and Playstation and endless facial hair conversations. The guys are great, so the waits are long… you end up picking your dashingly coiffured husband up from these adventures 😉 Needless to say Mr. SS really enjoyed the experience. Each cut was $20, tip included. To stay as fresh as he wanted, he would’ve liked to have gone every 4 weeks but always felt like he couldn’t afford it. He compromised and went every 6-8 weeks, resulting in an annual cost of $130-170.

I found a really great hairdresser when I moved here. However, I also really hate going to the salon. As an introvert, having a stranger touch your head as you’re required to make small talk is akin to torture. But after two or so hours, my hair looked so good. I had a lob type haircut, with all over color and highlights. I started getting gray hair around 25, and it’s obviously been getting worse. So my hair and color would range between $70-$90. Let’s average that at $80. Again, I wanted to go more often than I did, but what felt “reasonable” was every 2 months. This cost me $480 annually on hair! Which is insane. Add these numbers together, and we were spending as much as $650 on hair. And we are not particularly fancy people, a lot of folks pay A LOT more. I was intrigued by the notion of bringing this number waaay down.

At the start we had clippers Mr. SS used on his beard, so we bought a set of guards. We’ve unfortunately left those in PA, but lucky for you this means we have a readily available price of a new set. We bought this set from Amazon for $19.99, and it works a lot better than the old one. It also has the blade guards included and fits in a carrying case. I cut Mr. SS’s hair with the #2 guard on the bottom, with the #7 guard at the top. I attempted a fade the first time, and it is not a technique you can pick up from watching one YouTube video. So we simplified. The compromise leaves him pretty happy (8 out of 10), since I can cut his hair every 5-6 weeks (which would cost $190 annually at the barber shop). The first time was scary, now I feel like I have a handle on it.

For my hair, there were two compromises. The first was that I no longer have highlights. DYI highlights can be really bad, plus I didn’t want to damage my hair. Instead I do all over color about every 2 months. I have a lot of hair, so I’ve always needed at least 2 boxes of dye for full coverage. Since hair dye can be more than $10 per box, I researched different brands. Revlon Colorsilk runs for $2.97 a box at Walmart and had rave reviews. It works really well and it’s easy to apply- Mr. SS is getting to be quite a pro at it. I use #45 Bright Auburn. Full disclosure- I varied from that color once, trying for a different red, and it turned my hair a really dark, almost black color. I returned to the tried and true and haven’t varied since.

The second compromise is the length of my hair. I’m letting it grow, with an occasional trim. I have realistic expectations of what it is that I can do, and a fancy bob is not one of those things. While I do have really forgiving hair, there’s only so forgiving it can get… Long hair is also a lot easier to maintenance and I can put it up in the summer. Overall these compromises have been a win.

Bringing it down to cost, we are currently paying $56 annually for our hair (cost of clippers and a year of dye) and our lives are 0% different than they were before. I strongly recommend trying this at home and seeing how you feel. It’s easier than you think, ultimately doesn’t matter that much, and saves us $554 a year. Have you cut your own hair or DIY-ed something else for a frugal win?

7 thoughts on “Hot off the Presses: Another Frugal Couple Cuts Their Own Hair!”